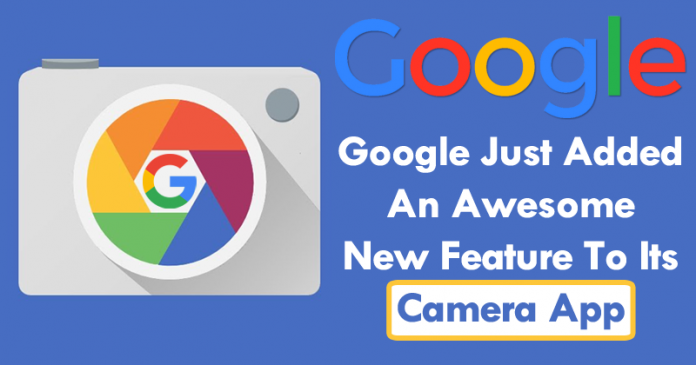 We all know that in the world of photography on smartphones, the tech giant Google’s Pixel smartphone is a success story, standing near the top of the DxOMark table, much due to a special mode which is only available in its camera app. But, now Google just added that special feature to its camera app.

Google Just Added An Extraordinary Feature To Its Camera App

In the world of photography on smartphones, the tech giant Google’s Pixel smartphone is a success story, standing near the top of the DxOMark, much due to the HDR+ which is only available in its camera application.

If you do not have a Pixel and would like to use this application then you should now thank the tech giant Google Camera 4.4 application port, due to which it is now possible to have HDR+ on any Snapdragon 820/821 or 835 processor powered smartphones.

Having gained special prominence in recent years, photography is one of the key points in the quality of a smartphone, and not only that, as this is being the point where many devices fail. Each brand has its own camera development process, leading some smartphones to have this point more or less optimized.

When we talk about “Photo Smartphones” then the tech giant Google’s Pixel smartphone is one of the highlights, being very well positioned in the table of DxOMark (experts in evaluating camera performance).

Contributing to the success of the tech giant Google Pixel’s camera is the HDR + technology that is embedded in the camera application, Google Camera, and what such good results originates.

Although this version of Google Camera is only available for the Nexus and Pixel, many attempts have been made to try to use this version on another Android device without success being achieved.

However, the Ukrainian programmer BSG has recently been able to develop a functional port of this application that allows any user who uses a smartphone with the Hexagon 680 ISP (Snapdragon 820/821 and 835 SoC) to use this application and in particular the HDR + mode.

For those who care about the security of this apk, Amir Zaidi, responsible for the port of the app Pixel Launcher for devices without root, confirmed the source code of the application thus verifying its veracity.

If you have a smartphone with one of the processors mentioned, then you can easily install this application and test the wonders of HDR + mode like it is used in the tech giant Google Pixel smartphone.

So, what do you think about this new feature of Google Camera? Simply share your views and thoughts in the comment section below.