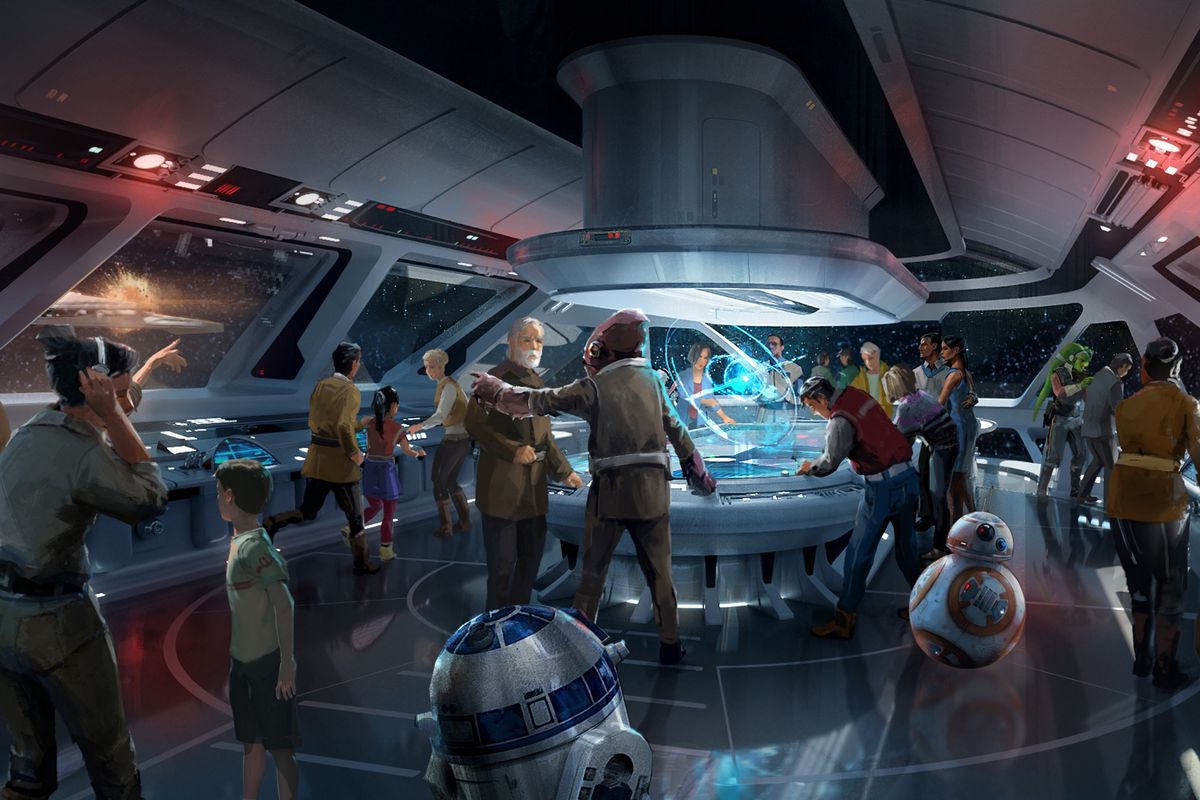 Last week, news broke that Disney was surveying customers about a new name for its Florida-based Hollywood Studios. The change would come alongside a fundamental reimagining of the park itself, moving away from the ride-centric home to attractions like Star Tours and The Twilight Zone Tower of Terror, and towards a more interactive, immersive land in line with the upcomingStar Wars: Galaxy Edge. “Enter this newly named Disney Theme Park and completely immerse yourself in the realm of some of your favorite stories,” the survey read, promising guests the chance to “step into imagined worlds made real, and take the lead in an adventure that surrounds you at every turn.”

I’ve written before about how immersive theme parks are the inevitable future of big movie and TV properties, and no company is being more aggressive in the space right now than Disney. Reimagining Hollywood Studios in this context would be a welcome move for anyone who believes in the potential of these kind of real-world, participatory experiences. The problem is the potential replacement names the company was reportedly getting feedback on.

The options — things like Storyverse, Cinemagic, and Kaleidoscope Park — weren’t just awkward and nondescript on their own. They were representative of a larger problem: a situation where a continuum of different mediums have all settled under the broad banner of “immersive entertainment,” making it difficult for companies to explain what they’re offering, and for audiences to understand what they might be getting when they buy a ticket in the first place.

These are issues that arise when any new medium begins migrating into the mainstream. But the trick with immersive entertainment is that it’s not a specific medium like cinema or television. As I wrote in the first installment of this column, it’s actually a number of different art forms that all share common techniques and traits, centered around the core idea of making the audience an active participant. The catch-all of “immersive entertainment” works great for creators and for discussing the larger trend, but it’s far too broad to be useful for audiences. It might be called a failure to pass the Friday Night Test: Nobody ever called up a friend on a Friday and said, “Hey, would you like to consume some passive entertainment tonight?” We say, “Do you want to go to the movies?” (Or, more increasingly, “Do you want to just hang out and watch Game of Thrones?”)

It’s part of the reason why the immersive sub-genres that have taken off the most have such functional names like “escape room” or “haunted house.” Potential audiences know the baseline parameters for those kinds of experiences going in, just like they do with a movie or a baseball game. “Immersive entertainment,” however, can cover everything from the VR attraction The Void, to Sleep No More, to a months-long alternate reality game and immersive theater hybrid like The Lust Experience. Each of those works are profoundly different, and when they’re stuck with the same label, that label begins to mean nothing at all. Factor in the rise of “immersive” as a general go-to marketing buzzword, and the waters are muddied even further.

It’s similar to the predicament that VR finds itself in. As that industry evolved, countless companies have poured money into content and hardware using a variety of approaches. The end result is a fragmented landscape. Depending on the context, VR can mean everything from Google Daydream, to a game on a PlayStation VR headset, to an elaborate, room-scale installation piece like Alejandro González Iñárritu’s Carne y Arena. That kind of confusion isn’t just problematic for consumers. It could actually be considered harmful to their works themselves, reducing every project to the lowest common denominator of just being Something You Experience Through a Headset.

Disney is no doubt hoping to sidestep some of that confusion. From everything we’ve learned thus far, the company is trying to create its own particular style of immersive entertainment, one that will combine theme parks, resort hotels, live actors, and interactive environments. Disney can then own that specific kind of experience in the public’s eyes by branding it however it likes. Should it land on an option like “Storyverse Park,” it’s easy to see the company opening a string of those lands across the world. It solves the customer confusion problem in one fell swoop. When visitors want to walk around and go on rides, they head to the Magic Kingdom. When they want to step forward into a more active, story-based adventure, they head to the Storyverse Park — and they’ll know exactly what to expect. What the rest of the entertainment world decides to call immersive mediums ceases to even be a factor.

But that’s also the secret to solving the larger riddle of what to call these various experiences in general. A strategy like the one above is about assigning a name to a certain kind of experience — just like haunted houses and escape rooms. It helps explain what audiences can do, rather than what the experience is in an esoteric sense. Down that path is where mainstream adoption lies, because that’s ultimately what’s so compelling about this kind of entertainment in the first place.

Participants at HBO and Campfire’s Westworld: The Experience didn’t talk about the pleasures of immersive theater and forced suggestion; they talked about how they had just gone to Westworld. Describe Disney and Lenovo’s Jedi Challenges as a entry-level augmented reality headset, and eyes glaze over; say that it lets you fight Kylo Ren with a real lightsaber, and excitement abounds. As different styles of immersive entertainment evolve and mature, it will be essential to discuss them in ways that are evocative for the audiences they’re supposed to appeal to — names that can pass that Friday Night Test.

Looking down the road, there’s one bigger-picture option that’s even more exciting. Talk to the visionaries at ILMxLab, and they describe an interconnected landscape, one where movies, TV, virtual worlds, and other immersive mediums all co-exist simultaneously, part of one gigantic, persistent story world. It’s echoed by the team behind Westworld: The Experience, who envision immersive experiences as film and TV extensions that can provide new paths into existing story worlds. In those visions, everything is immersive in some form or another — and when that’s the case, the term may not even be necessary at all.